Happy New Year, everyone! I tried to write some stuff over the last couple months but I've been dealing with enough anxiety and depression to not really want to post any of it. So I've got a thousand pages of backlog and my only resolve this year is to throw it out on a line like a word angler. Obviously this would be a lot easier if I weren't also dealing with the long, highly infectious tail-end of COVID-19, but most of the world is stuck with that piece of coal this year and at least a couple relatives who thing it's not that big a deal or that it will just go away if we ignore it. Allow me to reassure you that that is all bullshit, and if you've been feeling guilty for avoiding all the pandemic deniers in your life, don't. They don't deserve friends or family.

First off, at the start of the month, my roommate got COVID. As soon as their symptoms started to add up we began physically isolating from one another, which is a pain in the ass in a small two-bedroom apartment, and for a couple weeks I spent most of my time at my desktop, window open, meticulously cleaning anything the two of us touched. COVID's an airborne illness so I spent a lot of time imagining the virus coming out of my roomate's lungs as a vague poison mist, like in a video game. Nerdy as hell way to handle a pandemic but this slapdash "1918 Playbook" of dirt basic mitigation techniques gave me a two week lead and allowed me to handle keeping the place together while my roommate faced the worst of it.

When everything started to hit me I became less anxious and more annoyed, that I couldn't just dodge this illness completely like it was a shooting game boss's bullet patterns or something. For perspective, I'm the kind of person who won't one-credit clear a game because I couldn't figure out the perfect full-combo score pattern for stage one, so of course I was annoyed that I had caught an extremely contagious virus. Everything starting happening quickly from there, first my cough started to sound the same as the one I'd heard in the other room, and then all of a sudden after a ten-minute walk outside I found I couldn't smell or taste anything.

Shit has sucked! Even a secondhand account of how bad things sucked from my roommate painted a grim picture, but having dealt with it myself I can say that you probably do not want to get COVID-19 and should do anything within your power to prevent spreading it around. Even a light case is absolutely dreadful, with all the coughing, mysterious body pains, and the loss of all enjoyment of food whatsoever. For days I couldn' even taste ice cream, or extremely hot Thai food for that matter, and even now the only flavor that really sticks out in anything is sweetness. I'm the kind of person that likes the flavor of sparkling water, but at this point in time it all tastes like how people that don't like sparkling water percieves all sparkling waters: tin-flavored bubbly water. Shit sucks.

Having little else to do this past month but quarantine and feel like shit, it seemed natural that I'd break out an RPG or two to bide my time. I used to play a lot more RPGs but the last five years or so have left me cold on the genre for various reasons. After blasting through Yakuza: Like A Dragon in a two week, 160-hour stretch, I felt like I had a lot to say! Actually, I do have a lot to say, but I wasn't sure where to begin and I wanted to give my friends who were still running through the game some time to finish it before I started drowning them in my RPG thoughts.

Without letting the floodgates completely open, one aspect of the latest and greatest Yakuza that I've enjoyed is the age and demeanor of the party. I'm 34 now, which means it's been around fifteen years since I've been anywhere near the average age of the common RPG hero. Looking up to a twenty-something Cloud Strife was easier for me to do at age ten, when I had no idea what kind of things adults actually did and just wanted the kind of life that involved fighting an evil government for the fate of the world. I was also partial to the cast of Persona 2: Eternal Punishment, who were all adults with jobs in comparison to the high schoolers in past games. Even the returning high schooler, the main character Tatsuya Sudou from Innocent Sin, wore his afterschool clothes for that one. 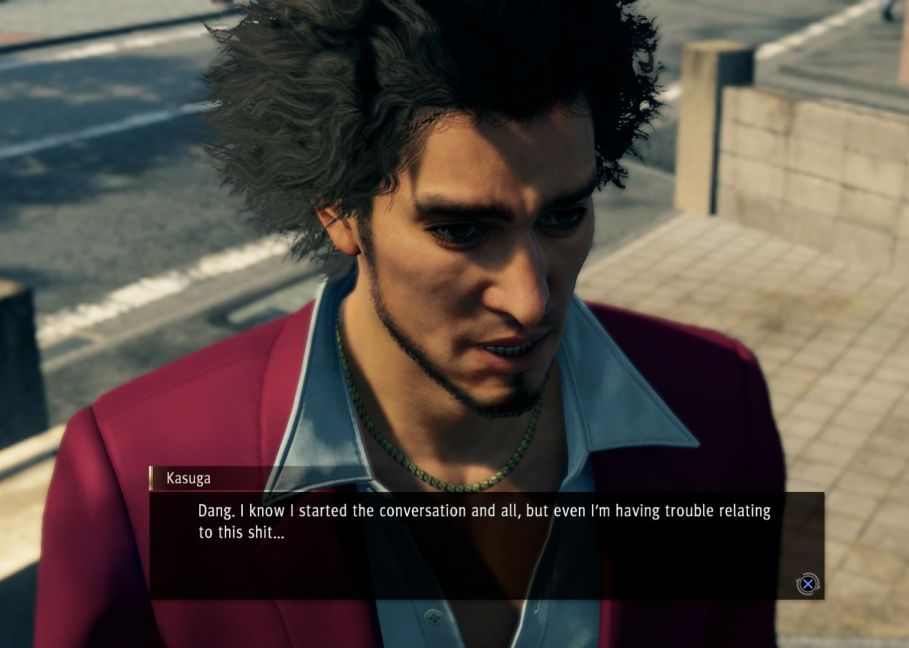 Kasuga Ichiban, the brand new Yakuza main character, is 42, flat broke, and dedicated to all sorts of noble and heroic things, owing in part to his love of Dragon Quest during his rough childhood. Thanks in part to this past year, I can see myself being forty, flat broke, and fighting for noble and heroic causes, in part due to my love of RPGs during a rough childhood. Should I ever take up arms against an eviction squad or punch a fascist so hard he explodes, please tell Fox News that I was radicalized by Yakuza's hot-blooded sense of justice.

After the main story, I haven't felt the need to run back through and do all the final bits and pieces. I've never been one to full clear these games, as every Yakuza game is an iterative improvement on the game that has come before it, but this is also the first time I've beaten one while it's new since the very first game for PS2. I've got time to savor the flavor, get better at mahjong, practice Virtua Fighters 2 and 5 as well as Virtua On, collect all the things, win all the kart races, complete the battle arena and do all the very ultimate final dungeons, for once. 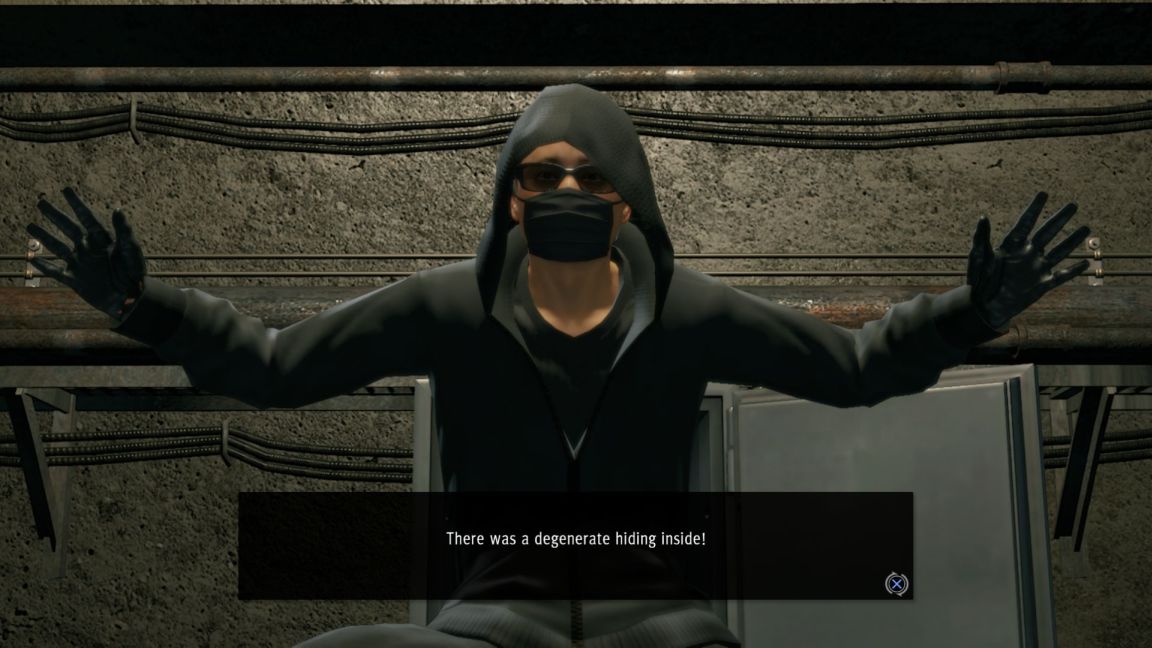 My focus has splintered a bit post-Yakuza, but I've been consistently pushing through the obscenely longform epic that is Final Fantasy XIV: A Realm Reborn. A lot of online friends and folks I've followed on Twitter have been into this game on and off for a while, now, and I signed up for an account ages ago but abandoned the idea after some family-related violence, only to pick it up again now after Yakuza of all games blew the RPG floodgates right back open.

MMORPGs aren't entirely unknown to me. In the mid 2000s I'd played Dark Age of Camelot, City of Heroes, and of course World of Whatever with my friends at the time. But uh, my friends at the time kind of sucked, they'd always blast their way to the end of the games we'd play without me and I spent most of my time soloing while they put together their raid schedules. My view on MMOs is thus always based around whether or not they're absolutely annoying to play solo or not. I wasn't quite enamored with Final Fantasy XI back in the day because it's primarily a group effort, in that you can barely beat the lowest-level trash mobs without help. 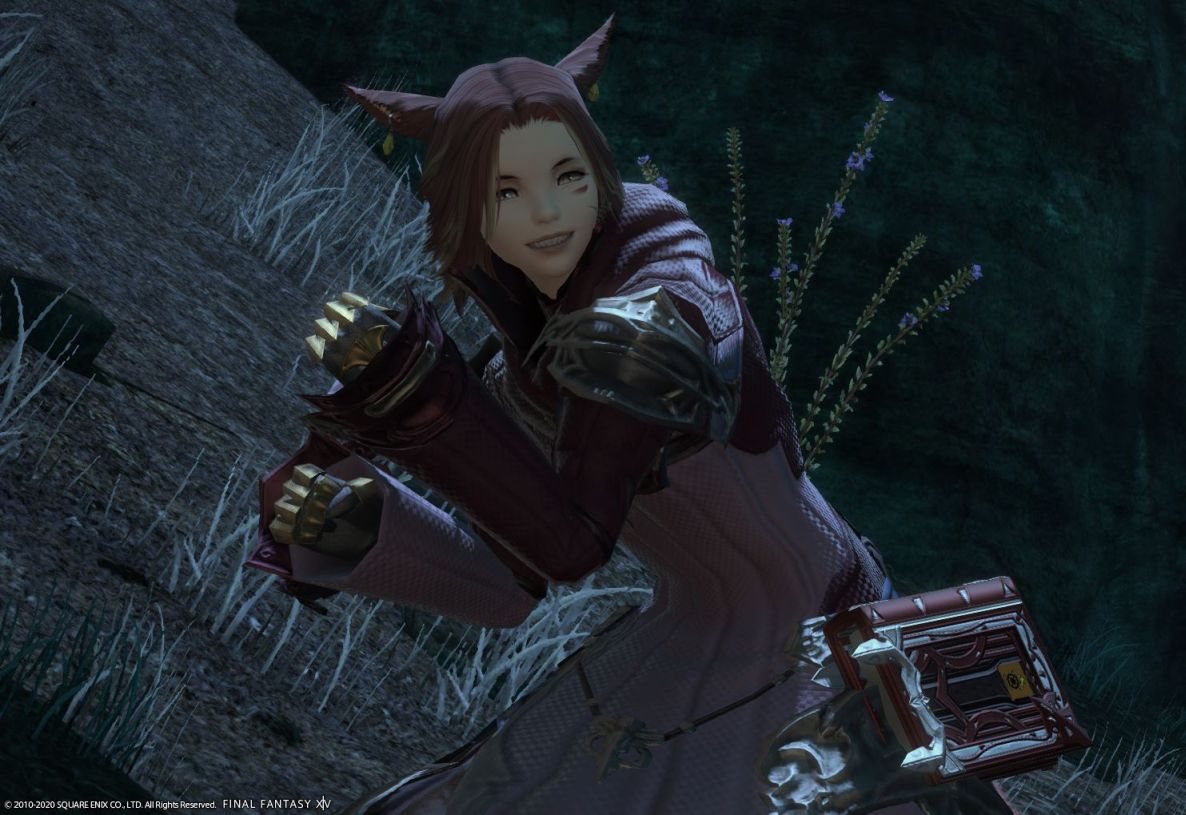 In an attempt to break with online gaming past, I made a female character that ended up being the lady version of my last FFXIV character, colors and all. One of my friends from back in the day always played lady characters specifically so he could catfish people for items and quest help so I always refrained because that's lame. On a broader note, I grew up in an atmosphere rife with toxic masculinity and was uncertain enough in my own lack of overt manliness that I didn't want anyone thinking anyone about me due to my choice in game characters. The kinds of excuses you make when you're stuck in that kind of muck are amazing, but it's 2021 now and I'm wearing the pinkest DDR hoodie while reminiscing in the middle of some MMO talk so let's call it a net win, okay?

Originally the plan was for me to go Summoner and blast everything apart, but I always resented being shoved into that 'base-ass DPS' peg by my old friends, too. So instead I focused on Scholar, because I am a genius healer. Also, I'm addicted to those fast queue times. Love those instant queue pops. Currently I'm nearing level 70 on Scholar and I'm not even a third of the way through Heavensward, so I've been switching back and forth between Astrologian for the quick queue pops and Samurai for general adventure times. On top of all this, I've got all the gathering skills and a good portion of crafting skills up past 50, so I could say I've been having fun with the basic mechanics of the game itself so far.

The story though... it's too good. And it's very mandatory, so if you approach the game wanting to do a classical MMO murder train to max level endgame content, you'll find that you actually can't. Dungeons, raids, class abilities, and new classes, literally everything is tied to some form of story progression, branching out from the Main Story Quest line with helpful little pluses to differentiate all the fun unlockable stuff from all the absolute sidequests lying around.

This is an MMO that non-MMO players should have an easy time playing through if you're there for the story, though I was surprised to find a lot outside of the mainline story to like. I was also surprised to find that, from the base game's final areas on, the soundtrack is packed with absolute bangers. I find myself wanting to do more of the harder dungeons and raids just to hear the music. I waited ten whole minutes in queue, wild for a healer, just for a chance to hear Gilgamesh's theme, as well as the chance to catch him hiding behind a door this whole time! 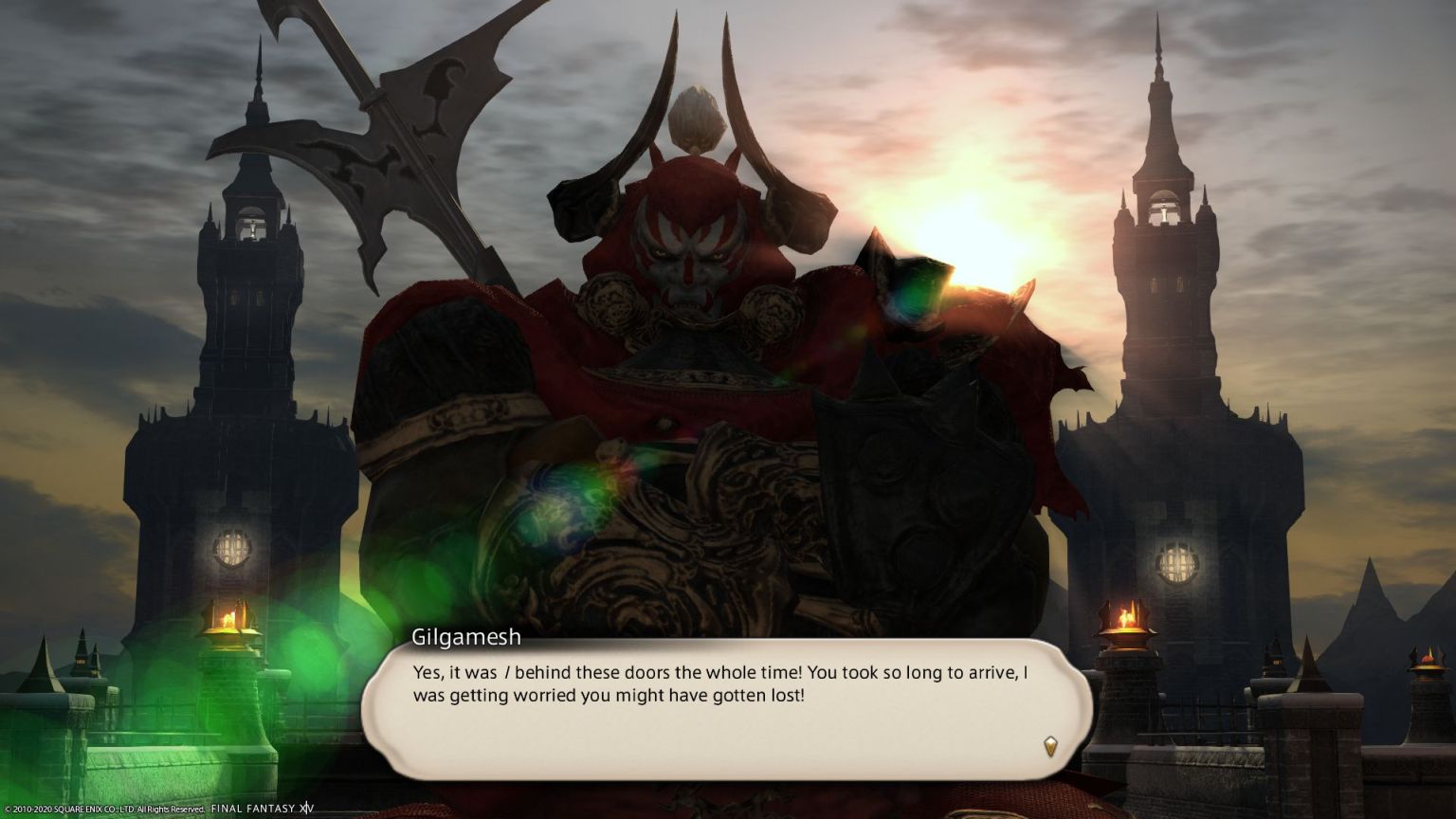 So yes, a fantastic game to be a cat and very calmly mark out over the constant references to other games in the series. Or just other Square games; in one dungeon there's a dragon called Einhander that has a very familiar weapon changing animation and that's just the tip of that particular iceberg.

Resolute in the Face of Darkness

It's great to be able to put a lid on 2020 and look forward to what little we might have going into 2021. We Americans will get to put as much of the trauma of the last four years behind us as the harm reduction president we've voted in gets to doing actual work, which is such a drastic change from willful inaction that we'll wonder why we've even got a willful inaction party in the first place. The United Kingdom takes its first steps out on the streets as the EU's snobby ex that still hopes they can get back together. That's not really a good thing, and it reminds me of me after every breakup in my twenties but unlike most of those breakups there's at least a bit of finality. Cops still exist, and well, that sucks, as does the continued existence of strange internet cults, but at least we'll have no shortage of bad guys for media set in the States for the next several decades!

Ugh. There's a lot of terrible shit to come out of this last year that we just can't pave over. But let's all do what we can to make it better.